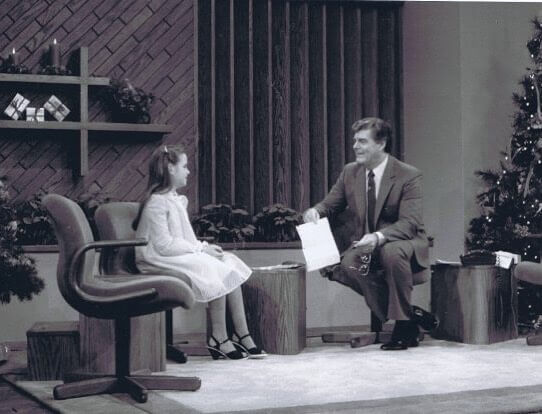 A client recently asked me how I first became passionate about PR. I gave them the basic speech about how my dad was a Public Affairs Officer in the Marine Corps and how I grew up immersed in all things journalism and PR. Heck, my bedroom walls were literally wallpapered with the billboards from this USMC recruiting campaign. When my dad was working at the Federal Building in Ohio, he would bring home the leftover billboards and I would wrap my bedroom walls in them (No kidding! I was the only girl who gave up frilly pink curtains for the dark stylings of dress blue uniforms and swords.).

But, if I’m truly honest, my first stint in PR really happened at age 10 when I was a guest on the syndicated Bob Braun Show in Cincinnati, Ohio in 1983.

I had organized a letter writing campaign in my school district for the Marines in Beirut after a suicide bomber drove an explosive-laden truck into the headquarters of Battalion Landing Team 1st Battalion, 8th Marines – killing 220 Marines, 15 sailors, and three soldiers on October 23, 1983. For the U.S. Marines, it was the largest loss of life in a single action since Vietnam; for the nation, it was the worst act of terrorism against Americans up to that time.

Since my dad (and all of my friends’ dads) were Marines, I was very diligent about following world events as I knew it could impact my dad being deployed around the world in either peace-keeping or war-time efforts. And, at the age of 10, that was an extremely scary thought. I followed the bombings in Beirut on the nightly news each and every night as my family and I sat and ate dinner. What I saw playing out before me on the television upset me so much that I knew I had to take action and do something – anything.

My dad had encouraged me to get other kids my age passionate about what was happening, and thus the letter-writing campaign began and quickly took steam throughout my school and the entire Finneytown School District – enough to even pique the interest of the producers of the Bob Braun show.

My interview with Bob was right before the Christmas holiday, and producers had prepped me that Bob would be asking what I wanted for Christmas at the end of the segment. Instead of saying I wanted a 10-speed bike (which I wanted more than anything in the whole wide world), I was coached to say, “All I want for Christmas is for the Marines in Beirut to come home” before the live studio audience. Quite an experience as the audience clapped and exclaimed, “Awwwww!” right in front of me. (And a real look into how things “really work” in the media.)

In the 1980s, Bob Braun was head to head with the likes of Oprah Winfrey. He hosted a live weekday noon variety show on WLWT-TV from 1967 to 1984, taking over from the legendary Ruth Lyons. With Braun’s live noon show, you never knew what could happen… or who would show up.

I remember my dad took me to the television studio – so handsome in his dress blues. He stood just off the stage and took a few black and white photos of me as I was interviewed by Bob. It was the very first time I was mic’ed, which was such a strange experience as a kid. I wore a dress my aunt made for me and my very first ‘pumps’ – a pair of black and white shoes that I was so excited (and nervous!) to wear. I insisted on barrettes with blue ribbons like these because they were so “in” in 1983 and I wanted to look cool on syndicated television.

Looking back, I wish I had footage of that day. My parents didn’t have the money to invest in a VHS or BETA system to record the show. As an adult, I have reached out to past producers of the Bob Braun Show hoping to find archived footage – but alas, it can’t be found.

It’s amazing how events like this can change your life. Even all these years later, I can remember what it was like sitting on that stage and hoping I answered all of Bob’s questions correctly. I remember how hot the lights were and how I couldn’t see the audience because of them. I remember being able to see my dad offstage, in his uniform, taking pictures of me. I remember hoping my parents would buy me that 10-speed bike for Christmas that year after the taping of the show (They didn’t, and not for lack of want – we just simply didn’t have the money for a big-ticket item like that.). I remember how good it felt to feel like I was doing something to help the Marines I loved so much.

And, most importantly, I remember how elated I felt when the Marines in Beirut came home.