The Ninjas at Think Tank are always hearing CEO and Ninja-in-Charge Trish Cheatham say things like, “When the world gets in my way I say, “Have a nice day!”

And, while she can’t claim this slogan as her own (her “boyfriend” Jon Bon Jovi coined this in his band’s hit song) – it is a philosophy that she firmly believes in and used when building the company culture at Think Tank. 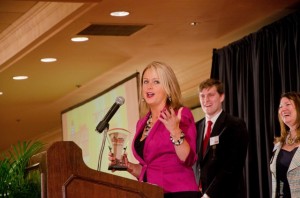 Let’s face it, Think Tank is known for its positive atmosphere, fun vibe, and teamwork. It is also known as a place where clients love to come in and sit down in our lounge and hang out while brainstorming with the team. And, today, Think Tank was recognized for its company culture and positive attitude by an industry standard – the St. Louis Business Journal.

Think Tank is proud as punch to announce that we were named the #1 Best Place to Work in St. Louis by the St. Louis Business Journal in the “Tiny” Category today.

Hundreds of entries were received from throughout St. Louis, dozens of companies were chosen as finalists, and only five winners were chosen in the Tiny, Small, Medium, Large and Giant categories. Think Tank snagged the top honors by ranking highest in several employee-surveyed categories including retention, job satisfaction, teamwork, managerial effectiveness and more.

So, what does this mean other than you know you want to work here?

It means we’ve created a space where teamwork, a “family-like” atmosphere and laughter helps us put out award winning work. It means we’re doing something right. It means we all have to stop making fun of our CEO when she sings positive Bon Jovi lyrics around the office and tells us to incorporate them into our strategies. 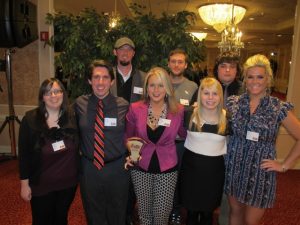 Thank you to the St. Louis Business Journal for our amazing write-up in the Special Section of their March 15, 2013 edition. Thank you for taking the time to ask our employees how we were doing as a firm and for giving us props for doing the right thing when it comes to them. Thanks for shining the spotlight on us – if only for a moment – and making our day. (Okay, our year!) We greatly appreciate it.

Oh, and thank you to our CEO and leader for caring about us and creating a space where we can all grow and do amazing things in the St. Louis area. Looks like we’ll totally be spinning some Jovi vinyl on the turntable this week!