So, I’ve been thinking a lot about what it means to be awesome.  As Americans we use the word so generously throughout our culture … “Check out this awesome movie!” or “That dinner was awesome!”  But, what does awesome mean exactly?

I’m here to tell you what it means.  Awesome is an attitude.

I choose to be awesome.

If you know anything about Think Tank and the culture I’ve built over the past six years, you know there are things I’m personally passionate about  – I love making a difference in the world, I love enacting positive change, I love inspiring others, I love helping my clients’ businesses grow, I love making the world more beautiful with good art and design, I love the rock band Bon Jovi…..  And, as I think about all the things I’m passionate about, I think of how they all have one thing in common – they all are positive things in my life that help me contribute to the goodness in the Universe. They all are a part of this awesome life I choose to lead.

I’m a big believer in what you put out into the Universe is what you get.  If you think, “I’m never going to have happiness.” you won’t – trust me.  The Universe listens and it gives you exactly what you believe to be true.

I was fortunate enough to be raised by a mother and father who taught me I could have anything I desired in the world as long as I was willing to work hard for it.  They taught me integrity, they taught me how to fight for my beliefs, they gave me permission to walk to the beat of my own drummer at a young age.  I was allowed to question, I was told to go for the gold, I was handed nothing.

My dad was a Marine and when I was in grade school we were stationed in Cincinnati, Ohio.  My Dad went out to schools and colleges and gave speeches on the power of positive thinking on behalf of the Marine Corps.  He was telling kids who felt they had nothing to look forward to but living in gangs and using drugs that there was another way – they had the power to change their destiny.

My Dad taught me how to choose to be awesome.

I think about that gift and I think how it has shaped me and made me gravitate to things that are positive – whether it is people, music, experiences.  You become what you wish, you are only as good as what you surround yourself with – never forget that. 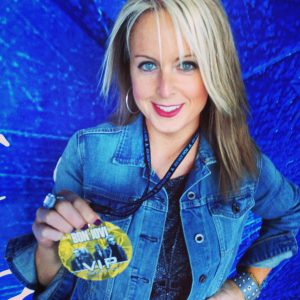 This past week one of my childhood dreams came true and it gave me chills down my spine.  Since I was 13 I have been obsessed with the rock band Bon Jovi.  And, although I have suffered endless teasing for my infatuation and loyalty to this band I have never faltered.  I have always been drawn to the band’s music because it is infused with a positive message.  I love their songs – so many of  Bon Jovi’s song talk about how you can do anything you want to do, to be grateful in your life, to have faith, and to hang on because you will make it – as long as you believe in yourself.

Since I was 13 I have wanted to be up close and to meet Jon Bon Jovi, the lead singer and figurehead of the band.  As an adult I’ve watched his philanthropic efforts, his business acumen and I have looked up to him as a mentor.

This past week I was fortunate enough to be backstage at his sold-out concert in St. Louis and to be seated in the first row of this amazing show.  I danced every song like it was the last time my body would ever move.  I threw my hands in the air, I sang with abandon, I threw my love into the Universe and reveled in every moment.  I made sure I was present – really present in that moment.

During the concert I saw him stop in between songs and look at me.  I smiled and he came over, grabbed my hand, laid on the stage and sang the song “Bed of Roses” to me.  I remember standing there in that moment, my heart both stopped and beating faster than it had ever beat at the same time.  I sang the lyrics with him as he flashed his perfect smile at me and sang to me as if I was the only girl in the room.

It was my moment.  And it was awesome.

Soon, it was over. It left me breathless and amazed as he winked at me and sauntered off to sing another song with Ritchie Sambora.  I stood there amazed as all the other people screamed and grabbed me and said, “Wasn’t that amazing?! You’re so lucky!”  But I knew better.  It wasn’t luck.  It was the power of positive thinking and sending out what I wanted – what I believed – into the Universe.

Later that week one of my friends said to me, “You did it girl.  You always said you’d touch Jon and you did.”  I though about that statement and how profound it was.  I had willed that to happen, I had woken up that morning and told everyone “I will meet Jon tonight.”  And I did.

Why?  Because awesome is an attitude.

And while meeting Jon Bon Jovi may not be your “WOW” moment or what you wish for in your life – I challenge you to make awesome your attitude.

When you get up each morning greet it with gratitude.  Be grateful for all you have been given and tell yourself how awesome you are, how awesome your day will be, how you will make others feel awesome.  Go to work with a positive attitude, treat strangers on the street with kindness, and believe that good things happen as long as you are willing to work hard.

And, the next time someone tells you you’re awesome tell them the secret I just shared with you – that anyone in this world can be awesome.

Why?  Because awesome is an attitude.