This month Google, leader in worldwide Internet domination, launched what they hope will become the new Facebook – Google Plus.

Of course the Ninjas at Ninja Central were all atwitter about this new social media platform.  What would it mean for our clients?  What would it do for brand management?  How will it potentially help search engine optimization (SEO)?  And, most importantly, how in the heck do we get an invite?! 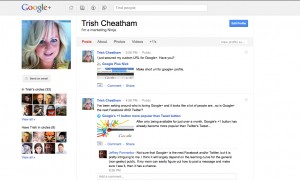 Well, I’m happy to report we scored the coveted Google+ invitations.  Why?  I guess because Ninjas lead a charmed life.  Oh, and we spend a heck of a lot of time on the Internet and Google appreciates that.

Google, in its infinite world-domination-esque wisdom (we have visions of Dr. Evil’s pinky finger strategically placed on the corner of his mouth dancing in our heads), only allowed a certain number of invites to be issued.  These invites were mostly to industry leaders, bloggers, and those who top the social media world.  You’ll find your Guy Kawasaki, your Mari Smith, your Mark Zuckerberg and, yes, even your Head Ninja Trish Cheatham there.

So, now that the Ninjas are “in” and doing our world-famous reconnaissance, we are ready to report to you.  We can now – finally – answer the question of the month…What exactly IS Google Plus?

Circles
Google Plus is a system that’s based on the concept of circles, so that anyone can take their college friends and drag them into a circle called ‘college buddies,’ and take your work colleagues and drag them into a circle that’s called ‘work friends.’ It allows you to share selectively the parts of your life with those you chose to seamlessly.

In other words, Google Plus is trying to solve the age-old problem of what to do when you’re friended by your mom, or your boss, or your mother-in-law, or….you get my drift.

In a promotional video, Google promises that organizing your online life into circles may actually help you to loosen up.  Hmmm…we don’t know about that, but it sounds nice.

Hangouts
Google is also giving Skype a reason to sit up and keep watch.  In Google Plus’ Hangouts you can hang out and chat via webcam with up to ten friends.  According to most of the Google Plus articles out there at this moment, this is their biggest and strongest feature that sets it miles apart from other social media sites such as Facebook or Twitter.

Sparks
The Sparks section is something we research-crazed Ninjas are especially excited about in Google Plus.  Sparks allows users to find videos and articles on subjects that interest them.  Simply click on “Sparks”, type in what you want to know more about, and Google will save your search and bring up relevant information in real time.  Genius, if you ask us!

Other Things of Interest
One of the things we like most about Google Plus is the ability to add whomever you want to your circles.  Unlike Facebook and the uncomfortable “friend request” and LinkedIn’s “how do you know this person”, Google Plus acts more like Twitter in allowing users to interact with anyone they wish to online. However, it also offers a privacy factor that Twitter does not, as it allows you to make your posts available to only certain circles.

Google Plus also allows you, like Twitter, to make your posts public – a great and valuable resource for those wanting to utilize Google Plus for SEO.

Google Plus also simultaneously launched an Android app the very day it launched.  While the Ninjas aren’t Droid users, we’ve heard from many people how painful the Facebook Droid app is to use.  The Google Plus app is slick and fully functional on Droid, and is very much like Google Plus online.  Users are able to upload pictures taken via their mobile phone automatically, and can group chat in an Android-based feature called Huddle.

Lastly, and perhaps most importantly to some people, Google is also promising to let you move your information out of Google Plus should you decide to no longer use the site.  The company says it will let you delete your information from its servers — a promise Facebook has never made.

Although we remain a little skeptical (remember Google Buzz?), the consensus at Ninja Central is that Google Plus very well may give Facebook and Twitter (and Skype!) a run for their money.

But, for now, we will skillfully continue our Ninja reconnaissance and wait for you to add us to your circles.